Learn how a sagging roof can be a danger to home owners.

Considerable sagging to corner of roof (hip) due to insufficient support to part of the roof structure. 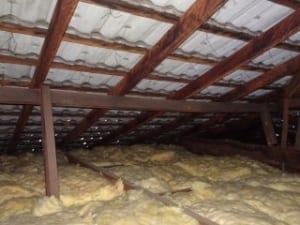 Inadequate support below a roof structure.

Props supporting this under-purlin (horizontal timber member, between the props) are too widely spaced the purlin is also undersize.

This can be rectified by fitting addition props for support where the purlin span is too wide, provided the props are supported off an internal wall or an appropriate size roof beam.

Sagging roof danger. What you need to know about roof construction to ensure safety. 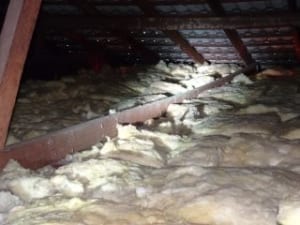 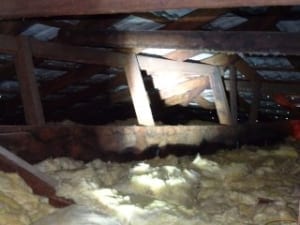 Weight of roof tiles is causing sagging of roof and beam to tilt presenting a potential danger of collapsing.

This is a common problem with buildings around the 1940’s to 1980’s. “They don’t build them like they used too”

Economical alternative to the expense of having a roof restructured

It would be worth considering replacing the roof tiles with metal sheeting.

Disadvantages of metal roof sheeting as opposed to tiled roof.