Learn how Barap Bolts were used to support roof structures in difficult situations.

How Barap bolts & roof support were an essential part of roof construction in the 70’s. QBIS.

What is a Barap bolt?

Purpose of a Barap Bolt also type of roof construction where they were used.

By tightening nuts attached to threads at each end of a rod. This shortens its length and places pressure that allows support, where struts are positioned.

These were a simple but effective means of roof support where conventional methods could not be achieved. 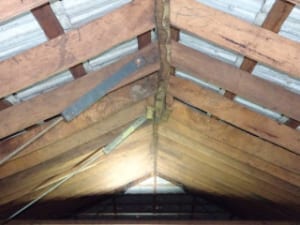 Brackets that have been attached to the rafters have no support below them, this is causing the ridge-beam to bow sideways. This can also cause timber to fracture from pressure pulling downwards when the bolt is tensioned to achieve support where it is required.

How to fit a Barap Bolt correctly.