The above photo shows an inadequately supported roof structure.

“They don’t build them like they used too” A potentially dangerous excuse for problems in old buildings.

This was typical construction for tiled roof’s of houses built in Brisbane around the 1940’s through to the 1980’s.

Here are a few examples of why they should not build them like they used to ! 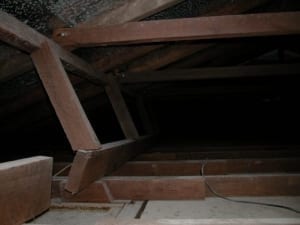 This photo shows the roof being supported off a binder beam that has not been braced or blocked, causing the beam to lean significantly. 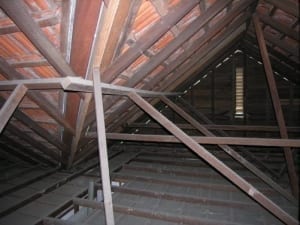 Another example of a poorly constructed roof structure with undersized under-purlin’s and supporting props.

There are two alternatives to solve this problem.

Although replacing the roof tiles would also require more securing of the roof structure (for tying down purposes). It would eliminate the need and much greater expense of restructuring. Also you end up with a new roof (exterior) which is far less likely to leak than a tiled roof.

Age must never be used as an excuse for a problem, especially one as DANGEROUS as this one!

I often hear, the roof has been there for over 50 years and has not gone any where yet, that is only due to luck. Would you risk your family living under these roofs in a storm? Damned if I would!