Unlicensed inspectors mistakes that have cost home buyers a lot of money.

The above photo showing water under the house was not mentioned in a report carried by an unlicensed inspector working for a large building inspection company. Neither were the following faults. QBIS. 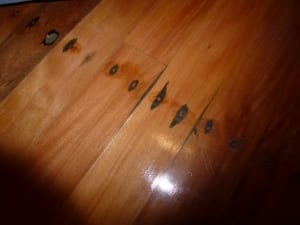 Seepage through a retaining walls and rising damp from the slab was causing the flooring to buckle and lift in places. Moisture meter readings taken were considerably higher than normally expected.

The buyer had to pay the cost of rectification of this serious problem their unlicensed inspector missed.

What you need to know about omissions made by an unlicensed inspector.

These costly problems were not identified by the previous inspector, only a matter of weeks before these photos were taken.

Seepage and rising damp must not be under-estimated. They can cause deterioration, attract termites and can cause health problems with inhabitants.

Be warned about using unlicensed inspectors and the consequences.

Other items not mentioned in the unlicensed inspectors building report.

These omissions in the previous report denied the buyer an opportunity to renegotiate or to consider alternative properties.