Roof problems that were understated in a building inspection report, in Redbank, a Southern suburb of Brisbane, 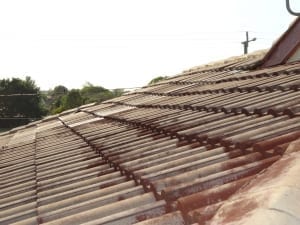 This roof of a two storey house, according to the selling agent was “passed” in a previous building inspection!

Importance of photos to bring roof problems to you

My client was later made aware that it was passed by the next Inspector, without any major problems.

Who do you think that building Inspector was working for? These problems could not have been assessed from the ground or the roof interior.