Alternatives to stumps that have moved also causes of movement. Packing is often fitted to tops of stumps from movement (since original construction) or incorrect fitting of the stumps. The latter is very unlikely with a house built in the particular era. Neither are good practice. QBIS. 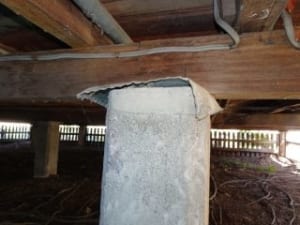 If stump movement has occurred in the past, for whatever the reason, the chances of further movement is far greater than it not occurring. The only way to guarantee against further movement, is to replace all the stumps, at the same time. If only replacing some stumps, the others are likely to cause major problems (and expense) when further movement occurs.

Further stump movement, items it can affect and problems it can cause.

Buildings must be level within reason before considering alterations, extensions also renovations otherwise problems will occur with further movement.

Timber stumps in some cases are often the best alternative.

If steel columns are you preference to stumps.

Some reasons for stumps, piers and/or columns to move.