Sagging roofs in Brisbane and how to have them rectified. 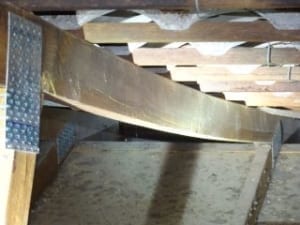 Here is an example of top chord of a roof truss that has a considerable sag to it, the sagging was also extensive. It would have been costly and not economically viable to reinforce the complete roof structure of this house. Replacement of the tiles with a lighter weight metal roof would be a viable option.

This method of rectification would be much more economical than having to straighten and reinforce a roof structure with tiles on it.

It can be very costly if your inspector is not prepared to access the roof exterior also roof interior and potentially allow you to negotiate a price that reflects this serious problem before you buy, otherwise it becomes your problem and at your expense, when you sell your house in the future.

Link regarding roofs that may be of help.