Additional concrete has been poured over rusted sections of these steel columns. This is not a good idea, further rusting of the columns is causing the concrete to crack (from corners of the columns)

Economical rectification (if the concrete footing has been poured at or below the soil level): 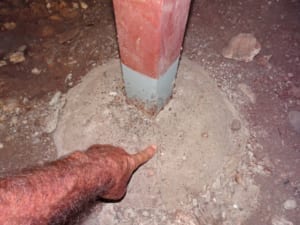 Unfortunately cracks in the footings will become worse and may eventually compromise the structural integrity of the footing and ultimately require replacing, this can be very costly. 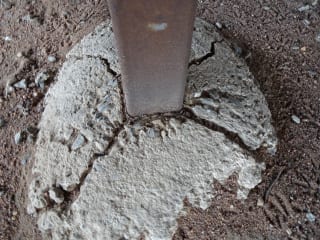 This is what happens after a few more years of rusting.

Larger fractures have occurred to the concrete footings that support the columns and the building. The footings require replacing at a considerable cost. This could have been avoided by fitting columns on top of concrete platforms.

Concrete pad and footing extending above the soil level.

This is a far better alternative to fit columns on top a concrete platform, not within it!