Learn about leaking roofs and damage they cause.

In most cases, water evaporates before it causes any long term damage. 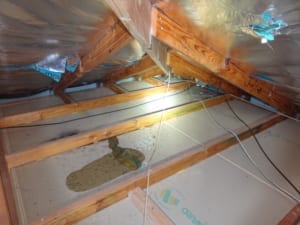 Current leaking from hip area of a roof.

Leaking from hip area. This is generally an unusual location for leaking to occur. In this case it is from the capping tiles requiring bedding also from lack of plastic membrane below them. Valleys, skylights, vent pipes and split level sections of a roof have a much higher probability of leaking occurring. 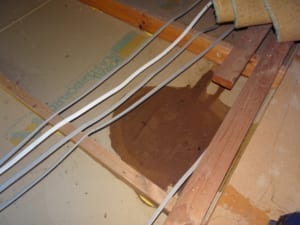 Although building paper has been fitted below tiles of this roof, water has found its way through causing damage to ceiling below. If left unattended the ceiling will sag to a degree when it will require replacing.

This example shows the importance of having your roof checked and maintained on a regular basis. 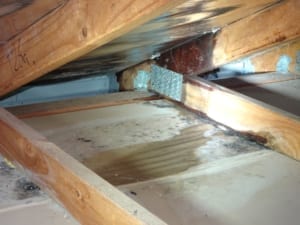 Here is an example of how water can travel from an area remote from where it is causing damage. This sometimes makes it difficult or impossible to determine the scource of water entry, to effectively rectify the problem. A broken tile was the cause.

Problems roof leaking can cause.

Roof gutter overflowing damage, related information that may be of use