Queenslander house and its components

Queenslander house and its components

Queenslander house components and their locations.

Illustration of a Queenslander house and its components. To help you gain a better understanding of how they were constructed. Courtesy of Peter Weddell, owner/operator of Qld Home Buyers Inspection Service.

This method of house construction was unique to Queensland and parts of New South Wales, built in the late 1800’s and early 1900’s. Although simple in its form it was most practically suited to the climate. Most were constructed with readily available timber from their location.

Practical design to suit the climate:

Unlike most houses built in the Southern states with bricks and roof tiles, the external walls were clad with horizontal timber weather-boards (sometimes vertical boards with the wall framing exposed, around the late 1800’s) and the roof with corrugated iron sheeting.

Although these structures had very little framing and securing for tying down (compared to modern day methods of construction)  it is amazing that a great number of traditional style Queenslander houses survived Cyclonic conditions, over many years. Mostly due to luck, rather than their methods of construction. 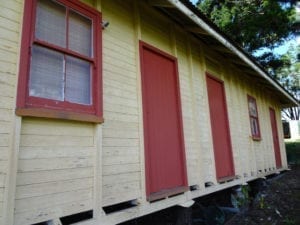 Exposed frame with timber cladding attached to the inside. 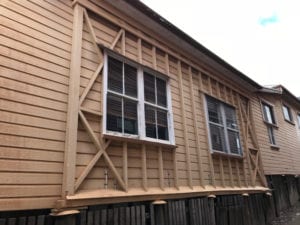