A tiled roof supported off an undersized ceiling beam (binder) which is also causing sagging of the ceiling joists below.

This is a common fault with roof structures of many homes built in Brisbane around the 1940’s through to the 1980’s.

Insufficient support below under-purlin of a roof structure 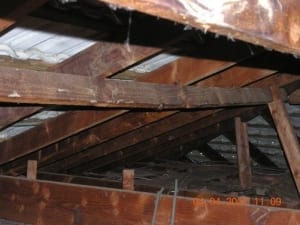 This roof is sagging considerably from lack of support between props of an under-purlin. Without restructuring this may cause the roof to collapse.

Method of fitting more support to a roof structure 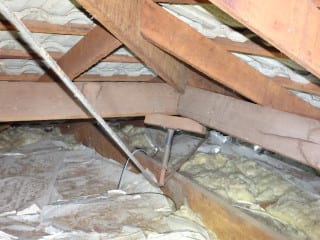 A potentially dangerous roof structure can easily be rectified by having a Barap Bolt fitted. They were used where roof support could not be achieved off an internal wall.

What is a Barap Bolt ? (in photo above)

Although no longer manufactured, they can easily be fabricated by an engineering business. 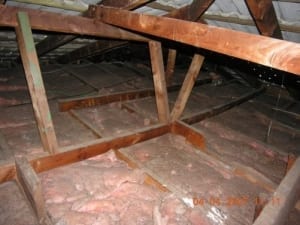 A poorly constructed roof structure above a Post War house, in a southern suburb of Brisbane.

An extremely dangerous situation that required immediate restructuring of the roof.

Alternative solution to restructuring of a roof.

Rather than restructure the roof, it would be worth considering replacing the concrete roof tiles with metal sheeting. This would reduce the roof weight considerably and may only require more securing of the roof structure (for tying down).

Some related material that may be of use: