These examples should be a warning to buyers that accept building reports from sellers and/or agents.

Learn how a costly home sellers report missed and understated faults in a building inspection report to help achieve a sale for the agent. QBIS.

Columns supporting a three level 10 year old house were grossly understated in a report supplied to a prospective buyer. It was suggested that all they required was wire brushing and anti-rust treatment. The degree of rust was considerably understated  in their report. The columns required replacing.

Column strength is dependent upon their wall thickness. Column wall thickness has been significantly compromised due to degree of rust caused by constant flow and ponding of water around bases of supports since the house was built.

Rusting columns required more than wire brushing and treatment as recommended in the sellers report! 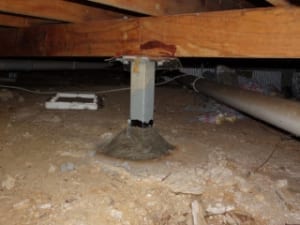 Additional concrete to be fitted over the rusted columns was recommended by the sellers building inspector. 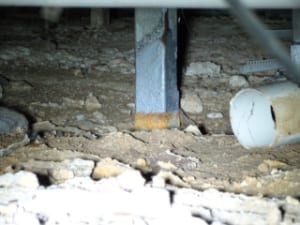 Further rust to supporting column, after anti-rust was applied.

The scource of the problem has not been addressed. These columns will continue to rust unless the drainage and pooling of water is stopped.

Why rusting columns are a serious fault.

Columns have a wall thickness of about 2.5mm.

The correct advice was not given in the sellers inspection report. 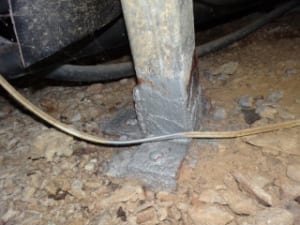 Unsecured electrical wire near base of a steel column. This badly fitted wiring with its potential danger was not identified in the sellers report. Some would think this potential danger would be protected by a safety switch, not necessarily and only if they are functioning correctly.

Other problems not mentioned in the sellers report were:

Never accept a building inspection report from a seller or agent!

TRUST NO-ONE. This is what happens when you trust a seller and real estate agent supplying a building inspection report that was written with bias, heavily in their favor to help a sale go through!