Vendor (seller) report risks. QBIS. An illegal structure built by the owner without Council approval. This was not mentioned in the vendors report.

The owner of this property decided to employ a inspector suggested by the selling agent. Here are some examples of what can go wrong when accepting so called “free” building inspection reports from vendors and how costly they can prove to be.

Consequences of an illegal structure not mentioned in a vendors (sellers) report.

Addition expenses to the house purchase price because of illegal structures. 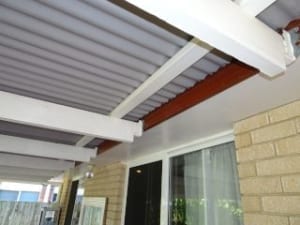 Metal fascias are not designed to support any structures, especially not with rivets. Structures must be secured and supported through the fascias and then to the roof structure, by means of bolted brackets.

Posts of the structure were also supported by paving that had moved considerably, indicating that further movement was likely. Posts must be supported by independent and reinfored footings to comply with building code requirements.

There is no such thing as a “free” report, especially from a vendor (seller)!

Never lose sight of the fact that when you go to sell, the problems are yours to fix or lose money in a resale!

Worth knowing before accepting a “free” report from a vendor (seller).

Inspectors referred to by agents are not likely to receive future referrals (their constant source of  income) if they supply a report that could potentially cost a property sale!